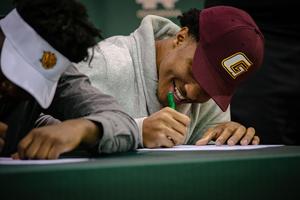 Joe will be attending Rhodes College as a member of the golf team. He is the son of Janelle and Patrick Reilly.He has a GPA of 3.5 and scored a 30 on his ACT. Joe is a 4 time varsity golfer and in his sophomore year he finished as a state finalist and this past season he won the TSSAA state championship.  He has had over 50 top ten finishes in his career. Joe is an accomplished golfer on the Junior  tour and has participated in the Bubba Conlee National Invitational, Press Thorton Future Masters, Medinah Shriners and Chick Evans events. He has qualified for the State Junior Am tour with a best finish of 2nd.

Ally will be attending Birmingham Southern College as a member of the volleyball team.  She is coached by Dan Clotfelter and Andria Dobson on the Irish volleyball team. She is daughter of Laura and Juergen Mildenberger. Ally is an outstanding student as she has a GPA of 4.19 and is a member of the National Honor Society, Mu Alpha Theta, and Delta Epsilon Phi. Ally has been on the varsity volleyball team for all four years at Notre Dame and served as team captain. She is a 3 time- All District Team Member and won the District Tournament MVP award her junior year. Ally also serves as Green and Gold Ambassador, a Search Leader, and has been a Co-Director for Search. She has performed community service at the Mobile Food Pantry, Pilgrim Monthly Food Drive, and went on the Cincinnati mission trip.

Daniel will be attending Bryan College as a member of the baseball team. He is coached by Trey Hicks on the Irish Baseball Team, Charles Fant on the Football Team, and Nancy Fox on the bowling team. He is the son of John and Onice Anderson. Daniel has a GPA of 3.1. Daniel is a multi-sport athlete who played baseball and football all four years. This past season he was also a member of the Boys Region Championship Bowling Team.   He is a versatile baseball player who has played multiple positions for the Irish. He is an All-Region and All-District selection and in 2016 was selected to the Tennessee Baseball Super Sophomore Team. Highlights of his career stats are a .310 Batting Average, 410 on Base Percentage , and 955 Fielding percentage.Daniel has performed community service for the Clifton Hills and Florida Food Banks  and the Hixson Life Care Center

Mackenzie will be attending Young Harris College as a member of the women’s basketball team.  She is the daughter of Leah and Kevin Johnson.She has been coached by Jim Schemerhorn of the Notre Dame Soccer Team, by Dan Clotfelter and Andria Dobson on the Irish volleyball team, and Jason Hill and De Lamb of the Irish Basketball Team. MacKenzie has a GPA of 3.2. She is a multi-sport athlete for the Irish who played soccer her 9th grade year, played volleyball for 3 seasons, and is a 4 year member of the Irish Basketball Team. Mackenzie is a two time All District Selection for Volleyball and led the team in kills and blocks the past two seasons and is a two time All District Selection for basketball where she leads the team in blocks and rebounds. MacKenzie has served as a Camp counselor for Notre Dame’s Girls Basketball Camp as well as the YMCA Youth Leadership Camp.

Monroe will be attending the University of Arkansas-Pine Bluff as a member of the football team. He is the son of Monroe Beard and Fransetta Finley. He has been coached by Jonathan Adams of the Notre Dame Basketball Team and Charles Fant of the Irish Football Team. Monroe has a 3.4 GPA. He is a multi-sport athlete for the Irish who played basketball for 3 seasons and is a 4 year varsity member of the Irish Football Team. Monroe is a two time Football East Region selection. In 2017 he was selected to the Academic All-State Team and this past season he was selected to the TN Football Coaches Association All State Team. He has been selected for numerous Notre Dame Awards that include the Iron Shamrock, Most Improved Player, and Most Valuable Linebacker. Monroe is also a member of Mu Alpha Theta.

Tariq will be attending the University of Arkansas-Pine Bluff as a member of the football team. He is the son of Edwin and Tara Nelson. He has been coached by Jonathan Adams of the Notre Dame Basketball Team and Charles Fant of the Irish Football Team. He is a multi-sport athlete for the Irish who played basketball for 3 seasons and is a 3 year varsity member of the Irish Football Team. Tariq is a two time all district basketball selection and was selected three times as player of the week. He is also a two time all East Region Football team winner as a junior and senior.  He has been selected for Notre Dame Football Awards such as Running back of the year as well as Defensive Lineman of the Year. Tarik served in various community service organizations that include the Chattanooga Food Bank, Glenwood Rec Center, and the McKamey Animal Shelter.

Jordan will be attending Garden City College as a member of the football team. He is the son of Glenn and Rachel Ford. He has been coached by Charles Fant of the Irish Football Team. Jordan played for the Irish Football Team for one season and played for Marietta High School in Atlanta for 3 seasons. Jordan made an immediate impact for the Irish as he gain 1,107 yards with an average of 12 yards per carry and accounted for 18 TD’s and had 42 tackles his senior year and had 1478 all-purpose yards. He was selected as the Division 2 East Region Player of the Year, the 2018 Best of Preps Team, and was named All State by the Tennessee Football Coaches Association. Jordan won the Notre Dame Football Iron Shamrock Award this past year.

Cameron will be attending Florida Atlantic University as a member of the football team. He is the son of Ernest and Shawn Wynn.  He has been coached by Charles Fant of the Irish Football Team. Cameron played for the Irish Football Team for his entire high school career. He is a multi-faceted player who had 722 yards rushing with 46 TDs, 1425 yards receiving and 16 TDs and 2TDs on special teams. His Career totals are 4605 all-purpose yards and 62 TDs. Cameron is a 2 time Times Free Press Best of Preps selection as well as making the 2017 and 2018 All State Team.   During his junior and senior year, he was nominated as one of the top three players in Division 2 AA as a TSSAA Mr. Football Finalist.