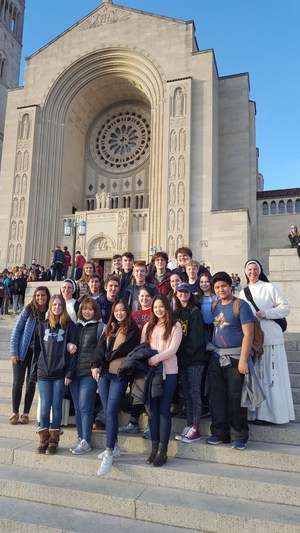 Students and faculty traveled to Washington, D.C. to attend the National March for Life.
Students and faculty joined thousands of others at the March for Life in Washington, D.C.
The weekend of activities began Friday as they attended they attended the Rally and Mass for Life at the Capital One Arena that included a message from Pope Francis. The group then headed to the March which headed Constitution Avenue towards the Supreme Court. Crowds came from across the country and messages were delivered from several notable names, included President Trump and Vice President Pence. Students were able to meet groups from around the country and even got to visit with alumni now attending the University of Notre Dame who brought over 1,000 students to the march.
On Saturday, the group enjoyed visiting many of the Smithsonian Museums and war memorials.
Print