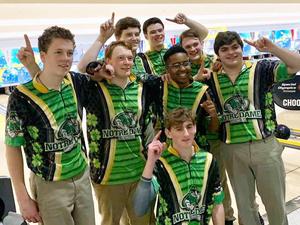 The team brought home the school's first ever bowling state championship trophy.
The Irish entered the state tournament with the best regular-season record in school history. However, they knew their biggest competition would be from the other side of the state. Entering into the weekend, junior bowler CJ Petrin was honored by the TSSAA by being named Mr. Bowling for Division II.
In the semifinals, the team came back from behind to beat St. Benedict (Memphis) and move onto the finals. Team leaders in the semifinal match were Carson Barasha with a 654 and CJ Petrin with a 606. The team then met Christian Brothers (Memphis) in the finals and won, 18-9. In the finals match, Griffin Lee led with a 668 followed by Petrin with a 658.
Print